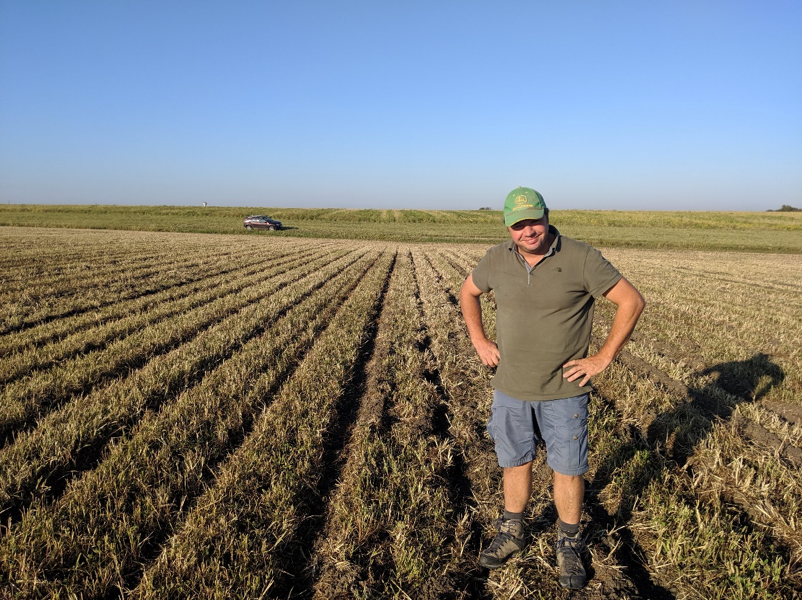 Nicolas has implemented a system on the farm which places building soil fertility and organic matter content as a paramount priority. There is a 7-year crop rotation, with 2 of the years purely devoted to regenerating soil structure and fertility. This is achieved by a 2-year alfalfa non-cash crop which is mulched after the 2-years of growth ready for the following cash crop. Over this time frame, the alfalfa can establish well and achieve an impressive biomass, with the rooting system working to break up the soil compaction and creating a soil structure that will benefit the following 5 years of cash crops by improving the infiltration rate, water holding capacity and soil condition for crop establishment. Additionally, as the crop grows for an extended period the rooting system is greatly more developed than an annual crop. This allows the crop to put down longer roots reaching down into the lower soil profile which will scavenge nutrients that have been leached from the typical rooting depths of many of the annual cash crops. This improves the nutrient cycle in the soil and reduces the risks of any nutrients being lost into groundwaters causing pollution. This is very important in organic systems, especially large-scale organic farming, as there is less reliance on utilization of externally sourced nutrient application.

As the Alfalfa crop is a legume, it also fixes nitrogen (N) via the roots symbiotic relationship with soil borne rhizobia. This means that the crop is continuously building soil fertility throughout the 2-year growth period as the rhizobia fix atmospheric nitrogen in exchange for the sugars that are delivered by the plant in the form of root exudates. This allows the crop to grow a large biomass without the need for external inputs. When the crop is destroyed to make way for the following cash crops, the stored N in the crop is gradually released as the crop decomposes in the soil. The resulting drip feed of organic N helps to maintain the following crops throughout the entire 5-year cash crop rotation and reduces the need for the farm to buy any external inputs, thus, reducing expenditure, time, labour and the risk of nutrient pollution.

The alfalfa crop also helps to pump carbon (C) back into the soil via root exudates. The plant captures sunlight throughout its lifespan and converts the photovoltaic energy into fuel via photosynthesis. Some of this ‘liquid Carbon’ exudates via the roots which helps to feed various beneficial soil organisms (like the N-fixing rhizobia already mentioned!). Some of this energy is used to create crop biomass in the form of the woody like substance known as lignin (a constituent of most plants) and when the crop is destroyed, this woody biomass decomposes slowly. Eventually, this soil organic matter is decomposed to a stable state, known as humus. This is the process of agricultural carbon sequestration which can be utilized to reduce harmful Green House Gasses (GHG’s) in the atmosphere that contribute towards the global warming effect. This process is also beneficial to farmers as it increases the Soil Organic Matter (SOM) content of the soil which has many physical, chemical and biological benefits for crop production.

In part 3 of my Romania blog I will be discussing precision farming techniques, weed control, and crop establishment.

*Note to the reader* - Joe Collins is part of the Soil and Water team here at IfA. In 2018 Joe was awarded the Cator-Gardner Scholarship. This involves a three-month work experience placement working abroad for an innovative agricultural business annually for three years. Joe's latest blogs look back at his recent experiences in Romania, with no-till and CTF enthusiast Nicolas Lefebvre from Exploatatia Agricola Birda.