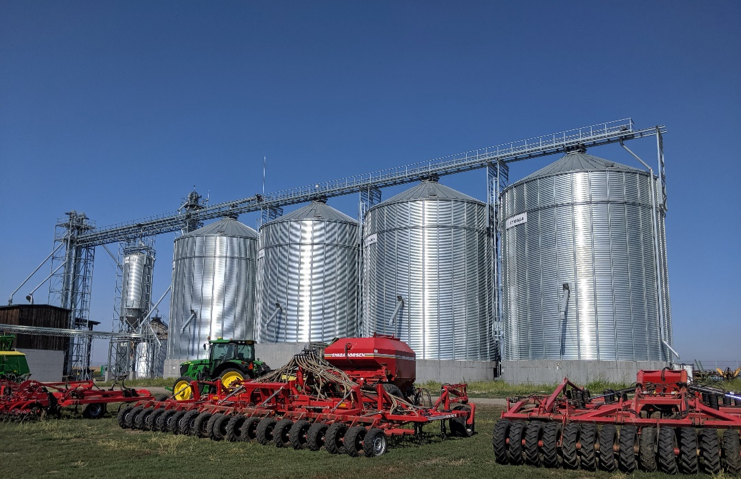 "I have just returned from a work placement in Timiș County, Western Romania, with a farming business called Exploatatia Agricola Birda.

The business manages 1600 ha growing a wide variety of crops organically (Feed Wheat, Milling Wheat, White Oat, Spelt, Rapeseed, Sunflower (LO and HO), Soybean, Feed Sorghum, Feed Peas, Buckwheat, Chickpeas and Lentils). The farm was converted to organic production in 2015 and has since then been focusing on not only the EU organic specifications but also many specialist conservative and regenerative crop management techniques.

The farming system is managed by Nicolas Lefebvre, a Belgian farm manager, with many years of experience of agriculture in Europe. I was introduced to Nicolas via email and it was suggested I could come and work for the company for a few weeks to sample Romanian agriculture as well as Romanian culture. I jumped at the chance as I have only worked in large scale arable crop production in the UK and Australia prior to this trip and I have only very limited experience of large-scale organic farming. These factors combined with the regenerative approach to farm management felt like an experience not to turn down.

I arrived in Timisoara, the largest city in western Romania, in early September. On the drive from the airport to the farm the vastness of the landscape struck me in comparison to the small fields of the UK. It was approaching the tail-end of the harvesting season, with many fields cultivated post-cereal harvest and many fields of sunflower and soybean awaiting harvest. There had been some fields drilled with oilseed rape with varying success – it was nice to see that it is not just us farmers in the UK struggling with the threat of cabbage stem flea beetle! The landscape south of Timisoara was generally flat however the further we drove away from the city the landscape become more rolling towards the more mountainous and forested regions of south-west Romania. It is estimated that the country has an agricultural capacity of approximately 14.7 million hectares, of which only 10 are used as arable land with wheat being by far the largest agricultural commodity produced.

The farm itself was new build, as it was bought as an amalgamation of smaller farms in the area, and as a result of this the farmyard and facilities were some of the best I have ever seen. The farm has a storage facility with 5500-ton capacity in silos and 2500 t capacity in warehouses combining to a total storage capacity of a staggering 7500 tons. The facility also has a pre-cleaner, a dryer with low temperature and an automated ventilation system. This allows the farm to store the commodities and sell at the optimum time for maximum profitability and also allows for the commodities to be improved by cleaning and mixing so that each load that leaves the farm is the exact specification required.

The farm is entirely ring fenced, which is useful for the manger Nicolas to keep regular checks on the crops as he does all the agronomy himself. The farm employs a business manager, secretary and 5 full time workers from the local area, all of who have been working on the farm for many years so are knowledgeable about the land and the machinery used. I enjoyed working on a farm with a larger workforce than the typical UK farm as it created a team spirit throughout the farming operation. This is typical of the larger farms in Romania as close to 25% of the Romanian workforce is estimated to be employed in agriculture, compared to an EU average of 4.4%. I got on well with everyone as they were very tolerant and amused by my incredibly poor efforts to learn the Romanian language…fortunately for me Nicolas spoke fantastic English to relay his thoughts and future plans for the farm."

Stay tuned for part 2 of my #CGschol which looks at how the farm builds soil fertility.

*Note to the reader* - Joe Collins is part of the Soil and Water team here at IfA. In 2018 Joe was awarded the Cator-Gardner Scholarship. This involves a three-month work experience placement working abroad for an innovative agricultural business annually for three years. Joe's latest blogs look back at his recent experiences in Romania, with no-till and CTF enthusiast Nicolas Lefebvre from Exploatatia Agricola Birda.