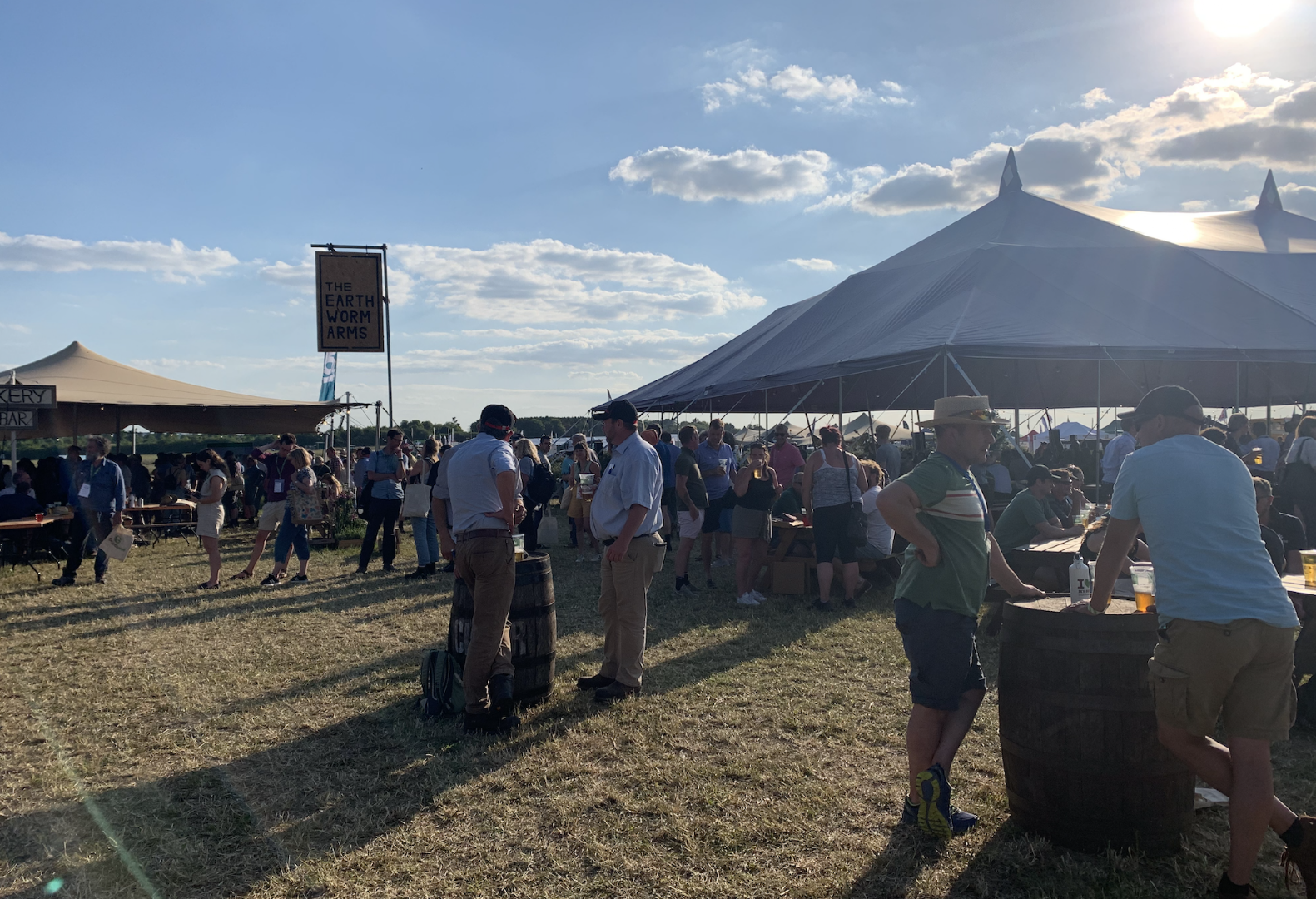 Last week Arran Redman, new member of the IfA soils team, began his first day with IfA, which also coincided with Groundswell! Certainly chucking him in at the deep end, Arran writes about his experiences below.....

"On the dawn of summer solstice, approaching mid-summers day, I arrived at the Groundswell event in the glorious morning sun.

As the punters packed in and the stalls began beckoning interested enthusiasts, I met my new team of innovative colleagues. What a way to start a new career.

I was introduced to IFA with a brief tour of our stalls pocket of dense information, packed with agricultural insights including the go-to guide to Reducing Greenhouse Gas Emissions at Farm Level and the fabulous Farm of the Future, Journey to New Zero report.

Once clued up on IFA's most innovative projects I jumped ship to join the punters in the Big Top, listening to Jill Clappertons insightful talk on soil health.

A fantastic introductory soil session, discussing the interactive relationships of soil biota with crop success and human wellbeing using examples of regenerative systems across the USA.

From farming practices to capital gains for on farm management, I entered the Big Top to listen to the Carbon Question Time, chaired by Liz Bowles. Expecting a heated debate on the justification of farm carbon crediting and the verity of paths to follow, I was delighted to find a very agreeable panel expressing interest, common place and collective questioning. Janet Hughes Programme Director for Defra’s Future Farming and Countryside Programme, was the highlight speaker for me, with informative and determined answers to questions regarding ELMS and future schemes and modules.

Once fuelled by the ever sustaining and developing information delivered throughout the day, I passed the crowds of sunned, cheerful and somewhat barefooted festival frolickers to find my team at our stall. To end the day with an almighty celebration we congratulated the winner and runners up of the Soil Farmer of the Year Award, a significantly important recognition for the farmers who are doing their part to protect and develop their soil heath across their farms.

We closed shop and and rested our feet, watered our throats with the ample ales of the Earth Worm Arms Bar, discussing the inspiring convocations that we experienced throughout the day.

As the sun rose on the second day of Groundswell, the strength of the sun showed that mid-summer has indeed arrived.

To kick off the day with a punch, Richard Gueterbock chaired the Farm of the Future, Journey to net-zero event in the Barenbrug Grass Tent.

In this session Angie Bywater eloquently discussed on farm carbon savings through renewable strategies. Mike Woollacott added how the progress of the Refuelling the countryside (2014) report has developed and matured into the Farm of the Future report (2022). Vicki Hird from sustain explained the good news stories from future policy and environment, but also the limitations of these innovative policies. Vicki highlighted the necessity for farm collaboration and the need to retain European relationships. Finishing with an enthusiastic statement to ensure that no farm should be left behind, solution - emergency funds and initiatives for small farms. Finally, and certainly not least, Sam Watson Jones Co-founder of Small Robot Company positively demonstrated the solutions from innovating outcomes from on farm actions assisted by technology and artificial intelligence. Could these fascinating small robots be our future? I hope so.

As we finished up with a insightful discussion in the Grass Tent, the heavens opened and the fully laden summer clouds rained down upon us, providing a refreshing twist to the so far Scorching Groundswell week.

Tom Heap in the Big top tent, chairing the uncertain waters of the relationship farming has with carbon, introduced his panel. Regenerative farmer Antony Pearce, Riverford founder and self-confessed veg nerd Guy Singh-Watson and Head of Impact and Carbon at Soil Capital Andrew Voysey. From the introduction to the audience question time at the end, my hands were gripped to my seat, heart pumping as I witnessed on of the most enthralling discussions I had ever witnessed. A cocktail of controversial opinions, pure honesty from the panel and Tom Heaps amazing ability to ask the interesting questions. Guy discusses passionately about the unethical nature of trading carbon, by putting a price on nature, yet also the captivating attractiveness of carbon payments when taking part in carbon sequestration. Although the panel were three sides of an impossible coin, representing the same currency, the concluding perception was overall general agreement and a place for concurrence. However, the general consensus was that soil carbon payments for on farm carbon sequestration could be one of the biggest risks to reaching our statutory agricultural carbons goal to reach net zero by 2045.

Needing a break from political debate I caught up with the team back at the stall, helping direct passing farmers, academics and entrepreneurs to some of IFA priceless information. This included two brothers who had been starting their journey to regenerative farming but required a little inspiration, they picked up one of IFAs go-to guide to Reducing Greenhouse Gas Emissions and after a quick chat and a friendly swap of details they seemed satisfied to find what they were looking for.

Back to the big top for the big discussion on new farming payments and the way that they are run. Secretary of State for Environment, Food and Rural Affairs George Eustice begins with a bellowing speech about Sustainable Farming Incentive and the modules that they include.

Topics discussed include soil health, hedgerows, integrated pest management and companion cropping. This was an insightful speech, expectantly well delivered, about how regenerative farming practices are integrated within government policy. Baroness Natalie Bennett with a friendly manor asked the audience to carefully listen to the speech of George and to question the discussion in the cabinate as well as the policies that are delivered. Minette Batters, president of the NFU confirmed with the audience that the drive of government needs to change, the SFI is a great start, especially the significant inclusion of soils within this policy. The necessity for a cross government food strategy has never been greater. This would create a resilient, long term piece of policy that can drive real change for the future. The convocation ensues towards the National Food Strategy and the disappointment with the lack of inclusion of average person diets and Henry Dibley's earlier strategy. There was anxiety towards the delivery of the Land Use Strategy, how long it will take and what it will include. Collaboration could be the solution to this land management dilemma to remove the delay from clashing controversial opinions and to ensure agreement before the strategy is delivered. Tony Juniper acts as a brilliant and helpful mitigation between the panel members. However, also helpfully suggesting the review of solar panel development on agriculturally valuable land. Of which George completely agreed with and delivered whole panel agreement. Minette emotes her concern that private companies are going to run away with the benefits from our delicious soils, suggesting from development, utilisation and the cashing in of soil organic carbon

Once the audience were set free to question the very foundations of the panels comments, there was overwhelming support towards health, food straight from farmers to support free school meals and give cheaper, healthier and fresher food to the very people who need it. There was significant support for the taxation on unhealthy food, to drive the cost of unhealthy foods up to subsidise fresh, healthy foods. Liz states the importance of baseline studies for on farm natural capital and askes when the government will standardise this as Farmers are under massive risk and miscommunication and settling for something way under what they deserve. George stated that this is all covered by SFI and to join SFI. Minette again emotively explained that this isn't quite good enough and that it should be a standard practice from today and Rosie humours the audience and politely asked the minister to hurry up.

The session ends with a question about how the gov will improve staffing issues in rural areas. George explained that there is a 2022 scheme to provide recruitment from other countries other than eastern Europe and that this will relieve some of the pressure. Even though as expected this was an emotionally driven and epically serious debate on real time topics that effect the entire UK population, the panel created an atmosphere of honest drive to solve the problems that face us, with a focus on collaboration and support for UK farmers.

As an interlude to the political potent and contentiously topical discussions I joined on the second day of the groundswell event, I decided to listen to the marvellous words of Merlin Sheldrake, author of Entangled Life. There is a satisfying calm that comes with hearing a person who talks so utterly passionate about their subject area with an unmeasurable measure of knowledge and wisdom around that subject area. Untangling my thought processes by teaching me an area of entangled possibilities.

Catching up with Deborah and the rest of the team in the IFA stand, much was to be discussed following such a flow of thought provoking discussions. The IFA stand, over the Groundswell event acted like a place of information, where you could discuss with your peers, whether you knew them or not, the important things in life, the discussions you have joined and the people you have listened to. Not only because the IFA stand was a dense pocket of knowledge and information, but also because the people who find themselves there are as passionate about their topics of interest as you are.

Overall the groundswell event was a major success. Bringing together people who work off the landscape but may do so in different ways. Inviting the people who create policy and legislation that affects the businesses that we depend on. Providing an opportunity to ask questions, provoke insightful discussions and to exchange details so that we can continue those discussions long after Groundswell is over. This agricultural event is a festival that celebrates the importance of working on the land and the natural systems that ensure that growing food can be sustained. A festival where people can talk about serious topics whilst barefoot and holding a cider. A festival like no other that I have been to before. I very much look forward to my second Groundswell event. "