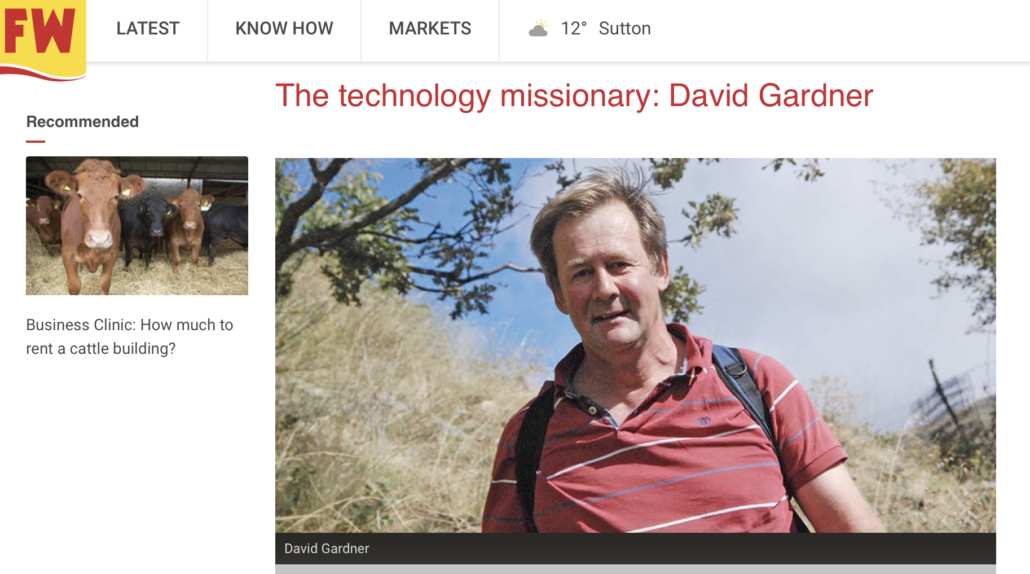 Innovation for Agriculture and the Royal Agricultural Society of England congratulate former CEO, David Gardner, for being shortlisted as one of the five finalists for the 2018 Bullock Award.

In writing his profile on Farmers Weekly, editor Karl Schneider, who refers to David as ‘the technology missionary’, said: “David Gardner owes the job he held until he retired earlier this year directly to his Nuffield research project.

It was the presentations he gave following his Nuffield study, on how new technology could transform UK agriculture, that led to him being asked to join the Royal Agricultural Society of England as a trustee.

In 2012 David became chief executive of RASE, with a brief to put in place a knowledge exchange programme for farmers. David formed Innovation for Agriculture (IfA), a consortium of 16 agricultural societies that uses its network to deliver knowledge exchange to local farming communities. IfA organises workshops, conferences and farm walks. Its current programmes include ‘Soil Health and Organic Matter’, ‘Precision Livestock Farming’ and ‘Antimicrobial Resistance’, with a new work programme under development on the use of digital technologies”.

Andrew Lazenby, IfA and RASE CEO, who took over from David in May this year said: “This is a well-deserved achievement in recognition of all the hard work David does, not just for IfA and RASE, but as a service to the whole farming sector in the UK. We wish him the very best in his future endeavours and we can’t think of anyone worthier of this prestigious award”.

The Bullock Award is presented to Nuffield scholars who have achieved the most 10 years after concluding their Nuffield research projects. It was established in memory of Steven Bullock, former FW manager. The winner will be announced at the Nuffield Farming Conference on November 23. Good luck, David!