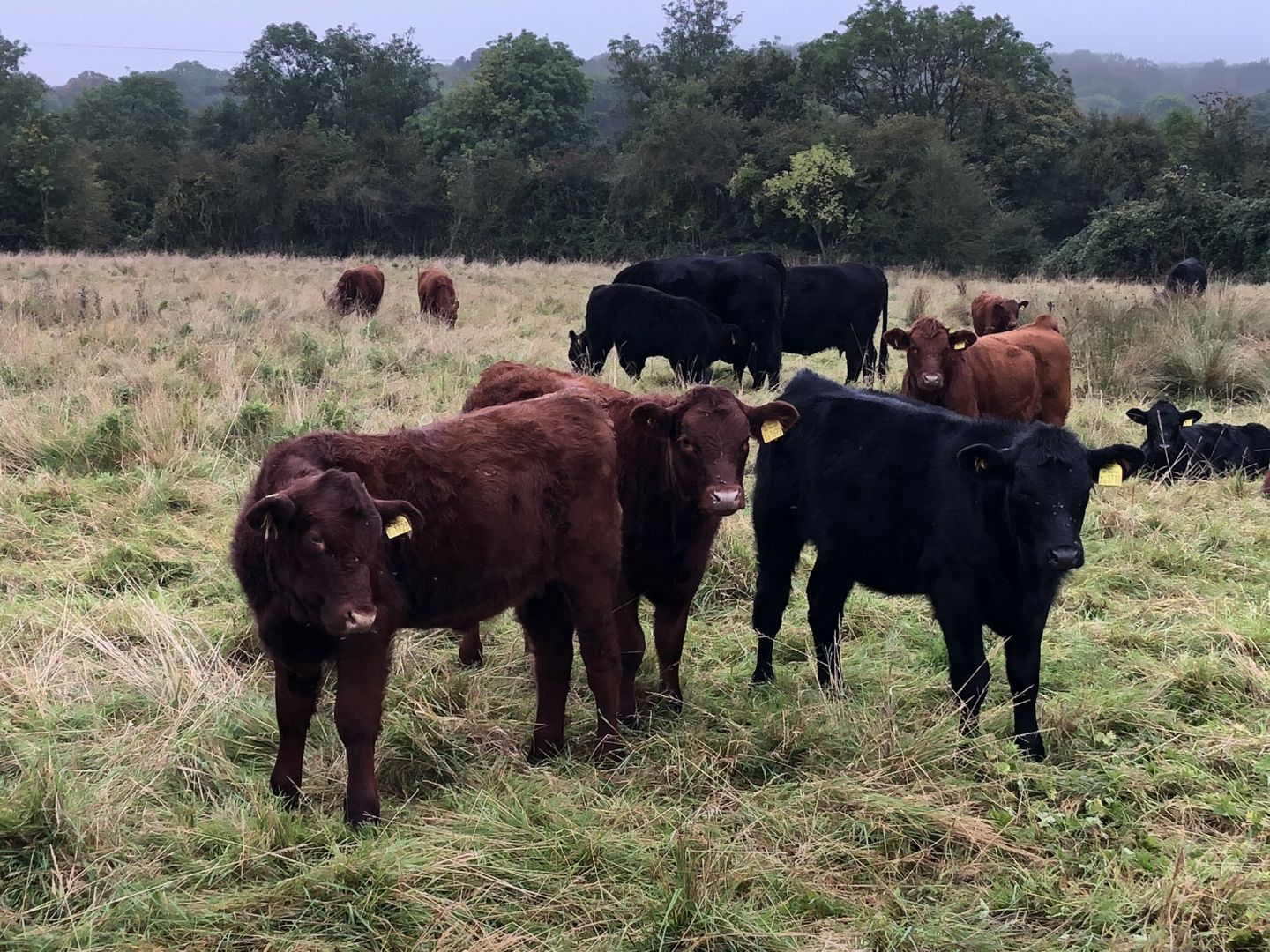 An Adaptive Multi-Paddock grazing approach in a regenerative farming system....

On the 8th October as part of our EU Nefertiti project on farm demonstrations, a group of 30 interested researchers, farmers and industry members were taken on a farm tour of FAI farms in Oxfordshire to demonstrate how a regenerative farm approach has improved soil health and biodiversity whilst maintaining production. Silas Hedley-Lawrence and Clare Hill manage an extensively grazed Organic beef herd at FAI farm, which is also Pasture-For-Life Accredited and is one of the handful of farms with Land-to-Market Allan Savory Ecological Outcome Verification (EOV).

A regenerative farming approach considers the farm as an ecosystem where carbon, water, and mineral cycles, and biodiversity are all core principles to farm management. For instance, in terms of the water cycle, efficient and effective water management from rainfall at peak times is critical, so that water can be harnessed free from the atmosphere (rather than from irrigation systems), is absorbed into the soil and stored in wet weather and used in dry weather. If it rains ten inches, you want ten inches to be absorbed into the ground, not two inches, while the rest washes away and contributes to soil erosion or run-off or goes back to the atmosphere. So, how do you farm around these ecosystem processes?


Like many beef farms, FAI uses some accepted grazing equipment to manage the land in the best possible way. Silas explained to us how he uses the electric fencing to control where the cattle are and for how long, and how he pipes water to the water troughs over 1200 acres of parkland, grassland and flood plain.

However, how they graze that land is where the point of difference lies. FAI farm practices mob grazing and are trialling an adaptive multi-paddock (AMP) grazing system as part of an ongoing trial with Macdonald’s UK. A key element of mob grazing is grazing an area of land intensively for a short period of time (~2days) and then moving the cattle on and not returning them to the same area for months. Doing this ensures that the pasture is allowed to recover as much as possible. Whether the rest period is for 2 or 6 months is an area of ongoing trialling.

Soil damage is reduced by controlling cattle movements and preventing them from returning to their former fields with fencing. In addition, not overgrazing the grass means leaving enough of the plant behind to photosynthesise and put down roots, in turn returning nutrients and carbon to the soil. More commonly practiced rotational grazing can cause overgrazing and damage to the soil if the cattle are allowed back too early to graze the grass that has not yet grown back.

How much of the plant you allow the cattle to graze is an essential part of grazing management. Silas recommended grazing only the top 30-40 per cent as it is the most nutritious part for the cow. The rest of the lower part can then be trampled back into the ground by the herd. If you graze more than 40 per cent, the roots underground stop growing. So even if you have a good amount of rainfall, it may not be retained in the soil due to the smaller/less extensive root system. By encouraging a deep root system, more moisture will be trapped in the ground mitigating against run-off and flood damage.


Silas helpfully explained the carbon cycle in terms of ‘solar panels’. We can see that carbon from the atmosphere is absorbed by plants through photosynthesis. This process puts carbon from the atmosphere back into the soils of the grass. As the roots grow longer and deeper, the more carbon and minerals they absorb and store in the soil. Due to a symbiotic relationship with soil microbes (which we are still learning so much about!), the roots transfer carbon from the soil to the leaves and stems of the grass. As a result, the whole pasture becomes carbon-filled, commonly referred to as a carbon sink. The older more permanent pastures contain even more carbon.

Cows in turn eat the grass and turn the carbon into meat and milk - nutritionally dense food. Yes, a proportion is belched out as methane, but methane has been shown to break down into carbon and hydrogen in just over a decade as part of a circular carbon cycle. Carbon is absorbed again by the plant through photosynthesis and moved down to the soil through the roots, while hydrogen comes back as rainfall. Nevertheless, this circular carbon cycle is wholly dependent on certain ways of farming and fairly stable cattle numbers, not an increasing cattle population!


Roots that are longer and deeper can access more minerals in the soil and transfer minerals through the root network to encourage mycorrhizal fungi. Mycorrhizal fungi are beneficial because they significantly increase the capacity of plants by acting as extensions to their root systems (known as mycelium), as well as plant messaging networks, creating fungi-based soils. When the cows trample litter/leaves above the ground and push it back into the soil, it also puts minerals back into the system. Silas has found that there has been very little need to supplement his fields or cattle. This is in addition to the extensive trees and hedgerows criss-crossing the farm, which we observed cows selectively browsing whilst on the tour. This behaviour has been shown to be related to cattle seeking out minerals and nutrients as they need them.


Silas explained that fields that were grazed once had the same biomass returning after 2-3 months rest as those with 6-month rest periods. Trials as part of the AMP grazing project are looking into the different rest periods and differences in grass re growth as well as species variety. The well-established mixed herbal leys on the pasture helped earn the farm it’s EOV status, with clovers, birdsfoot trefoil, plantain, sainfoin and fescue all growing on site from a natural seed back that Silas explained re-awakens with the practice of mob grazing and trampling. Rare grasses that have not been found in Oxfordshire in more than fifty years are now growing back on fields at FAI farms. External organisations also do private research and counts on site, e.g., butterfly counts.


Most of the 200 strong herd will be outwintered. Prior to the winter, home grown hay bales are laid out and prepared as feed for the cattle. They are arranged in such a way as to delineate the adaptive cell grazing being trialled here and to minimise tractor usage and inherent diesel costs. There are about 152 cells (4 bales per cell), giving a total number of around 600 bales in the fields. Each day over winter, the cattle consume a bale of hay or two depending on the weather. If there are harsh weather conditions, cattle may need more spacing and more movement, so Silas is as adaptive as possible to the situation hence ‘Adaptive’ Multi Paddock grazing.

Outwintering - how to do it? Cattle are used at the top of the park in late June and early July so that they can graze around the meadows and trees. The middle bloc to be used for winter is left ungrazed. Over the summer, the cattle gain condition to ensure they do not lose too much body fat over winter. The bales are in effect supplementary feed for the cattle over the colder, darker months when the grassland would not be sufficient feed and energy. The remaining hay that is not eaten is trampled into the soil by the cattle along with manure and urine in a two-stage fertilisation process. Silas explains his experience of managing this type of over wintering and how trampling the carbon rich hay has meant the farm does not need to rely on artificial fertiliser. 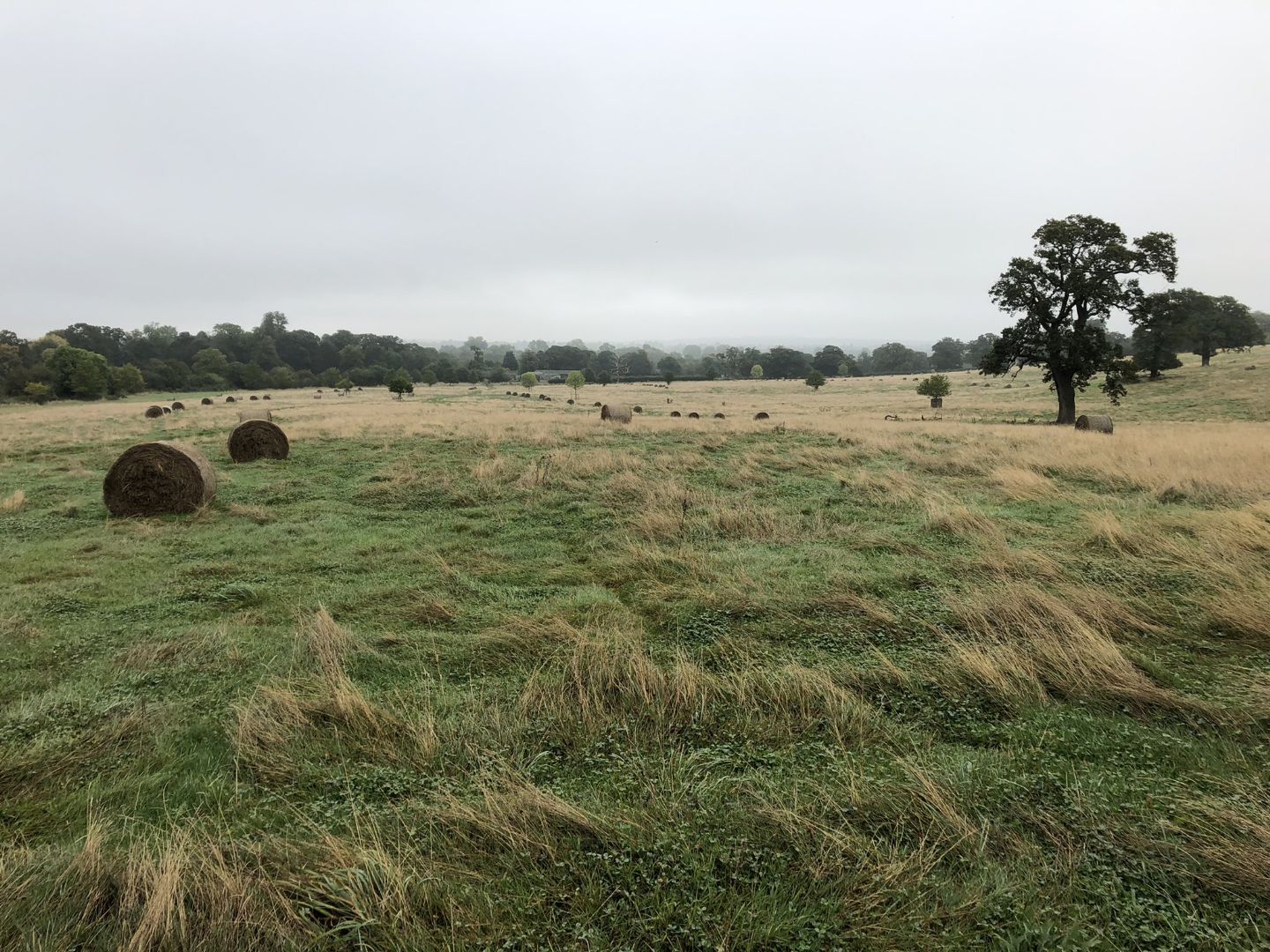 Due to the practices mentioned, FAI farm has an excellent record for biodiversity in plant and animal life, all the while producing nutritious food as a commercial farm. Silas and Clare finish cattle between 18-22 months with zero supplementation or dependency on imported feeds, such as soya. Compared with non-regenerative systems, they are finishing cattle 130d less on average compared to non-regenerative farms. The cost of production for rearing beef cattle indoors in the UK is ~£2.53/head/day whereas at FAI farms they are managing 83p/head/day! Furthermore, fertility is excellent with an incredible 98% conception rate and 100% calving success (no calf mortality or interventions).

FAI farm is not without its challenges and the biggest one Silas told us about related to their new herd of 152 dairy stores, which had not even seen grass before they arrived let alone an electric fence! They adapted well but due to their naive immune systems and the environment of FAI farm, flies are a problem and there have been outbreaks of New Forest Eye. This infectious disease requires antibiotic intervention as it spreads rapidly and is painful. Nevertheless, Silas and Clare are applying their systems thinking and regenerative approach to the issue and are looking at ways of preventing this next time. Their plain is to reduce fly numbers through better management of the dung and the ecosystem of dung beetles on and in the dung. Watch this space!

After the tour, there was some facilitated discussion about the farm and regenerative farming in general.

Ask the audience - What impressed visitors?

Barriers to adoption of regenerative agriculture


If you have any questions about the farm walk at FAI Farms or about Regenerative Agriculture in general, please do not hesitate to get in touch on info@i4agri.org