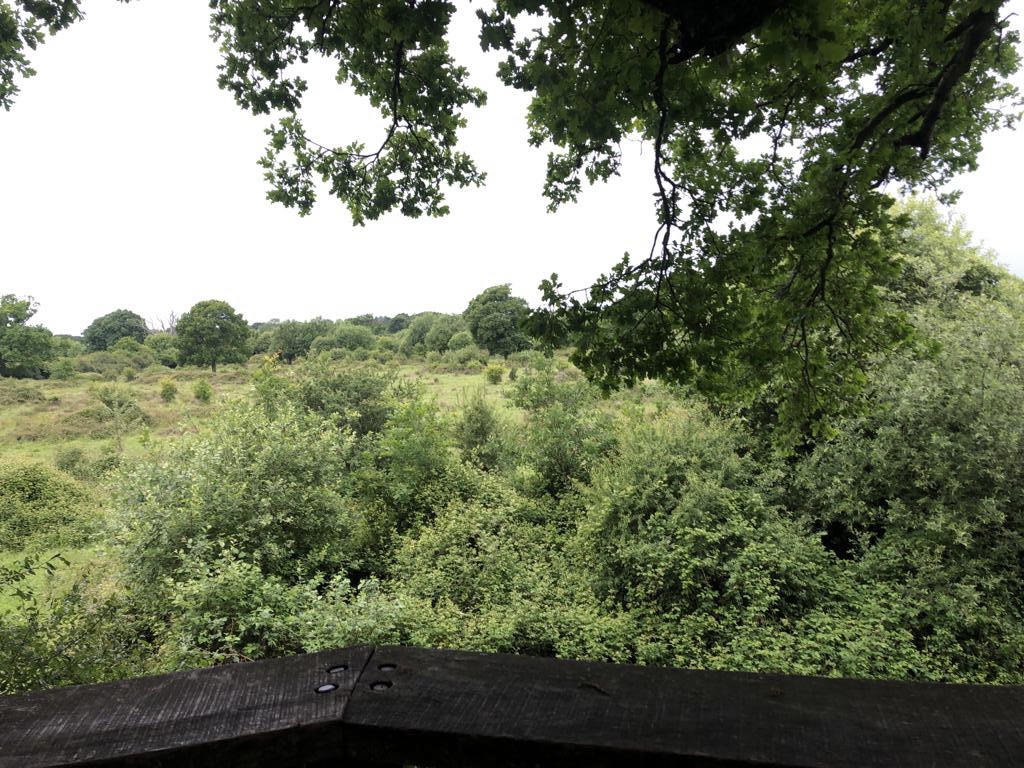 Deborah Crossan, Soils and natural resources manager at IFA, recently attended the Worshipful Company of Farmers visit to Knepp Estates. The purpose of the visit was to investigate the broader remit of regenerative farming, spanning from the total rewilding project through to the first year of regenerative farming bringing Sussex cattle back onto a redundant dairy farm.

The photograph shows an area of land which is now 20 years out of production.

During the visit, Deborah met Kate Russell, CEO of Tellus Natural Capital. In the blog below, Kate shares her thoughts about the trip.

'Farmers and land managers are currently thinking hard about how nature restoration can be better managed alongside agriculture, so an invitation to visit the Knepp Estate, which pioneered a bold approach to nature restoration and which is now starting a new regenerative agriculture venture, was the perfect opportunity to look and learn.

Russ Carrington, manager of Knepp Regenerative Farms, hosted about 30 Liverymen and guests on a tour of both the rewilding project and the regenerative agriculture site. After coffee and a short introduction in the Granary, we set out on a walk around one of the rewilding blocks with ecologist Laurie Jackson. She took us to a block of land which was last farmed as an arable field about 20 years ago, then left for 4 or 5 years before the reintroduction of grazing herbivores, specifically Longhorn cattle, Exmoor ponies, fallow deer and red deer. There are also a handful of Tamworth pigs which perform a useful rootling function, although numbers are capped to control this activity.

The only management of the land is now by the animals – there is no human intervention other than animal welfare and removal of those animals which are sold into the food chain. Grazing pressure now manages the site, which includes scrubby areas of thorn and bramble among more open grazed glades, some of which was carpeted in unpalatable ragwort and fleabane. In answer to questions, Laurie explained that there would be no intervention to deal with these “weeds” – they would wait, watch and see how nature managed it. One or two farmers’ hands were twitching with the urge to pull the ragwort up!

The scrub was alive with songbirds, including chiff-chaffs, whitethroats and, to everyone’s delight, several singing nightingales. The estate has become a stronghold for these birds, which nest low down in the scrub. Only the males sing and, sadly, the fact that they were still singing this late in the year meant that these particular males had failed to attract a mate this season. Moving on we saw the extraordinary spectacle of re-introduced white storks gliding overhead to their huge nests in the oak trees and spotted both red and fallow deer moving through the trees.

Walking back we passed through the eco-friendly campsite, where people can bring their own tents or stay in yurts, shepherd’s huts and even tree houses. A campsite shop sells Knepp beef and venison steaks, sausages and burgers and those staying can take a guided safari or walk the numerous footpaths which cross the estate.

After a delicious lunch in the Granary, including Knepp beef, venison sausages and salad leaves from the new market garden, we hopped onto a trailer for a trip to the regenerative farm, which is in its first year. Here Russ showed us his Sussex cattle, several of which were wearing Nofence GPS collars in a trial to see how useful they might be in managing mob grazing. They are housed for a short winter period on wood shavings and waste paper, which is composted and then used in the new “no-dig” market garden. The cattle are followed around the mob-grazing plots by laying hens which clean the pasture and add further nutrients to the soil. The eggs are currently sold locally and in the campsite shop, but all the farm and market garden produce, including that from a planned micro-dairy, will eventually supply a proposed new farm shop and café. The whole farm system is designed to be an integrated one, producing quality food sustainably and selling it locally, while enhancing the environment.

The Estate uses both in-house ecologists and volunteers to monitor all this activity, amassing over 30,000 records of more than 3,000 species in their efforts to understand what is happening and why. Russ is now adding to this with his own monitoring of soil health and biodiversity in what will surely be a fascinating project.

We all left Sussex with a good deal to think about and reflect on. Our grateful thanks to Russ for hosting us in great style and to Laurie for her informative guiding, as well as to Knepp Estate’s owners, Lord and Lady Burrell, for allowing us to visit this fascinating business.'