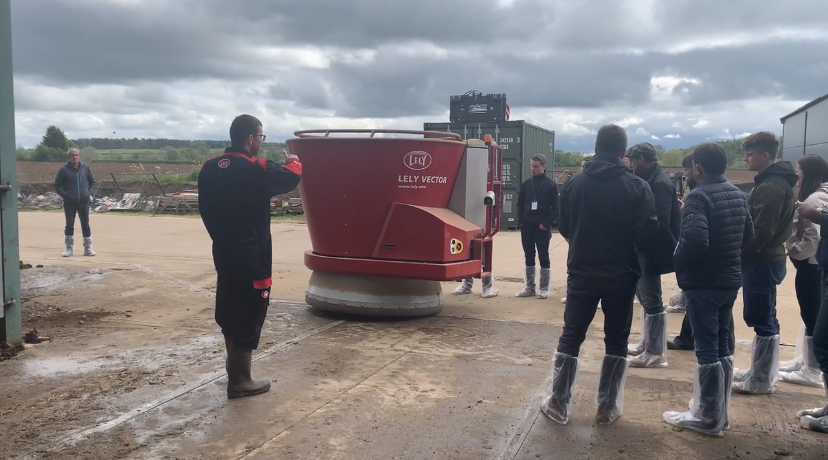 Earlier this month Jeff and Judith Lester, along with their children George and Izzy, warmly welcomed a group 47 EU NERFERTITI members for a tour of their technology focused dairy enterprise at Manor farm. Here they are milking 185 cows which are housed all year round, plus 100 followers and around 30 beef finishers.

The farm was built within the last 3 years, allowing the Lesters the opportunity to build a completely fresh system, focusing particularly on using robotics to increase cow numbers without a resulting expansion in labour. They have increased the herd from 70 cows – 185, with labour only increasing from 3.5 units to 3.9.

This was achieved with the use of 3 Lely Astronaut milking robots - two Lely A4 and one Lely A5 (the A5 is the newer model and is cleaned with steam instead of the acid and alkaline based system of the A4). The cows are producing approximately 2 million litres of milk per year, translating to avg. 11,500 litres per cow. The milk is sold on a direct contract to Tesco.

George believes that the health and welfare of the cows has been monitored more closely since they started using the robots. Mastitis detection in particular has improved, with the robots using milk indicators to detect whether the cow has an udder infection. These indicators are milk colour, temperature, conductivity and somatic cell counts. If that S.C.C moves above 200 then that cow will be treated with antibiotics, however the Lesters are believers of prolonging milking for as long as possible to allow the cow the opportunity to self-cure.

A Lely feed optimiser is used to improve feed efficiency. These feeding robots are designed and fitted to function on a form of digital tracking system that runs around the cow sheds. Working on an hourly basis, 24hours a day, the optimiser feeds the cattle whilst also ensuring that the feed is pushed up, providing the cows with constant access to food and encouraging them to eat more frequently. Using a robotic grab to fill the optimisers with the chosen Total Mixed Ration, the robots can then feed for up to 3 days before they need to be refilled - another example of how the use technology is freeing up the time of the staff. To comply with their Tesco contract, Soy must not be included in the ration, instead using sunflower mix to reach the protein targets.

Genomic testing has also been a key aspect of the efficient system at Manor Farm. Genomic Testing uses a young animal’s DNA to estimate their genetic potential and therefore gives the Lesters confidence to make informed breeding decisions, choosing which young animals to bring into the herd as replacement females.

They then Embryo transfer their top 1% of the milking herd and implant into the bottom 10%. By fast tracking their genetic gain, they have seen £43 more profit per heifer.

Manor Farm is an excellent example of an efficient modern-day dairy farm, which utilises technology to reduce costs, whilst also allowing the family to have a healthy work/life balance – an aspect which is so often disregarded in dairy farming. Although George acknowledges that their indoor system may not be for everyone, he believes it key to ‘farm the land you have, not the farm you want’, and to their credit they are certainly doing just that.