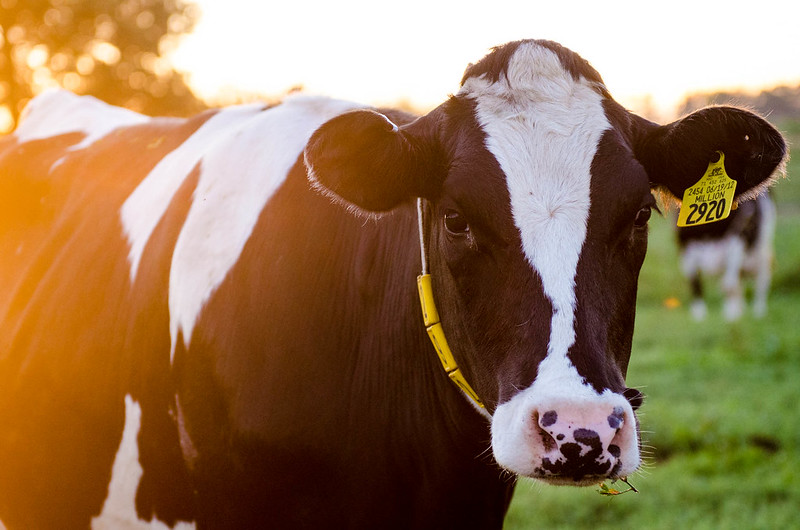 This is the first in a series of blogs where Head of Livestock - Lisa Morgans-  shines a spotlight on a livestock farm and showcases how they ensure the best level of care for their herd.

As lockdown restrictions lessen, we have happily resumed farm visits with the first for this year taking place in the heart of Devon. A county full of hills and grass -  the area is particularly well suited to dairy farming. The first farm in this blog series is a great example of where a traditional approach is combined with innovation and precision management. The business is run by a father-son team – Aubrey and Ed - with Ed taking on most of the farm management after his dad was injured whilst working. They manage ~100 Holstein Friesian cows producing ~9000L milk through a Lely Automatic Milking System. Housed all year round on slatted floors, investments such as a robotic slurry scraper and excellent bedding hygiene ensure these cows have a comfortable and relaxing place to stay all year round.

After several seasons battling calf pneumonia and scours, Ed has set up group calf housing using hutches under cover. Combined with the 4 Qs of colostrum management (Quickly, Quantity, Quality and sQueakily clean), they hope to see dramatic improvements in calf health and growth. They also rear beef cattle and a flock of Dorset sheep – which have been fetching a very handsome price in recent months, for a change! I suspect this diversity in the farming enterprise is likely to be part of their success and sustainability into the future.

Mastitis one of the leading causes of antibiotic use on most dairy farms, not to mention a painful condition for cows and damaging to a farm’s profitability. However, the mastitis rate for this herd runs well below the national average. When benchmarked against other farmers by their vets, they consistently come out as one of the lowest in the group. With only 3 cases this calendar year, Ed knows that if the cases rise it is something he has done that has caused it. Ed describes to me how when the robotic ‘shit shoveler’ breaks down or fails to dock and charge, then there is a subsequent rise in mastitis from build up of dung in the shed. As a consequence, he has now installed an alarm system connected to his phone so whenever the robot goes awry/breaks, he can intervene early before it becomes a significant health problem.

Lameness is the other major health and welfare concern in dairy farming. It is a painful condition and is not recorded well or consistently on farms. Some farms record only the feet that have received a treatment and applying a block to the claw is not always perceived as a ‘treatment’.  Some farms will record every cow with a mobility score above 2, which can inflate the herd incidence somewhat. On Ed and Aubrey’s farm, if they classified all cows with a mobility score over 2, they end up with nearly a 1/3rd of cows classified as lame – a rather daunting prospect! Since having a professional foot trimmer in every 2 weeks,  they see very low levels of white line disease or sole ulcers, and cases of  digital dermatitis (DD) have decreased year on year. Ed tells me that foot bathing religiously twice a day, with clean solution every time, has helped stamp out DD. They find using a combination of formalin, copper and zinc has really helped. Too much formalin and the cows do not like walking though the foot bath and there are environmental issues to consider with copper and zinc, so Ed aims to use as little of each as possible.

Clearly the automatic scraping of slurry via a robot has been key to reducing the risk of DD. Ed also sees benefits in not being ‘stuck on a tractor scraping up shit all day’. He has more time to spend observing the cows and tweaking his management using the data from the robots. Plus, he can now start work at a reasonable time and leave work at a reasonable time whilst still having a life – critical factors if we are to encourage more young people to get into farming. Ed and Aubrey are both big fans of claw blocks and are very low users of antibiotic, demonstrating their proactive approach to medicine use and cow welfare. I was happy to see how comfortable the cows looked in the cubicles with very few cows standing and many sprawled out fast asleep! The ever-popular cow brush had a cow scratching away the whole time I was there. Ed also tells me his footbath is too short, so still looking for ways to improve!

Mycotoxins have been a big challenge for the performance of their herd in recent months. Ed and Aubrey have pinpointed this to a contaminated Wholecrop harvest and an unsuitable clamp leading to spoilage. This resulted in more cases of rumen upset, particularly with their transition cows. The Mycotoxins may have also had a role to play in lame cows with swollen hocks, which would be the only time antibiotics are used on lame cows in this herd.

Ed admits his herd’s fertility is not where he wants it to be. This has been a bit of a historical issue and they have tried different strategies such as serving @35d, more time spent observing cows in heat and using the data from the Lely robots to monitor individual cow performance. This data has been invaluable for Ed as it shows the cows are cycling well but not holding to service and coming back in heat at 100-150 days in milk. Ed found that the ration was partly to blame as cows were sub-clinically acidotic, which has impacted their fertility. Their 100 d in calf rate is where they are focusing efforts and aiming to see improvements. With a new nutritionist and feeding 14.8kg DM in the ration with added concentrates fed at the robots, things look to improve rapidly.

Feeding dairy cows can be a tricky business, not to mention one of the largest costs for many farms. It is also where dairy farming has a potentially large carbon footprint. Soya derivatives are commonplace ingredients in the cow ration and usually this comes from Latin American where deforestation to grow the soya leaves dairy farming with a hefty environmental footprint. Aubrey and Ed are keen to find out more about their carbon footprint - what is the impact on farm emissions from the hedges, grasslands and other crops grown on farm?  What is the impact on emissions from rearing beef and sheep as well as dairy? How much carbon do they absorb and sequester? Is their farm a net emitter of greenhouse gases or net absorber? Despite having a farm carbon audit performed by their milk supplier, Arla, a whole system approach that includes all facets of the farming system seems to be lacking.

Farming is likely to be a key industry that can offer ready-to-go solutions to the climate crisis in the form of carbon sequestration and in my experience, farmers are lining up ready to help!