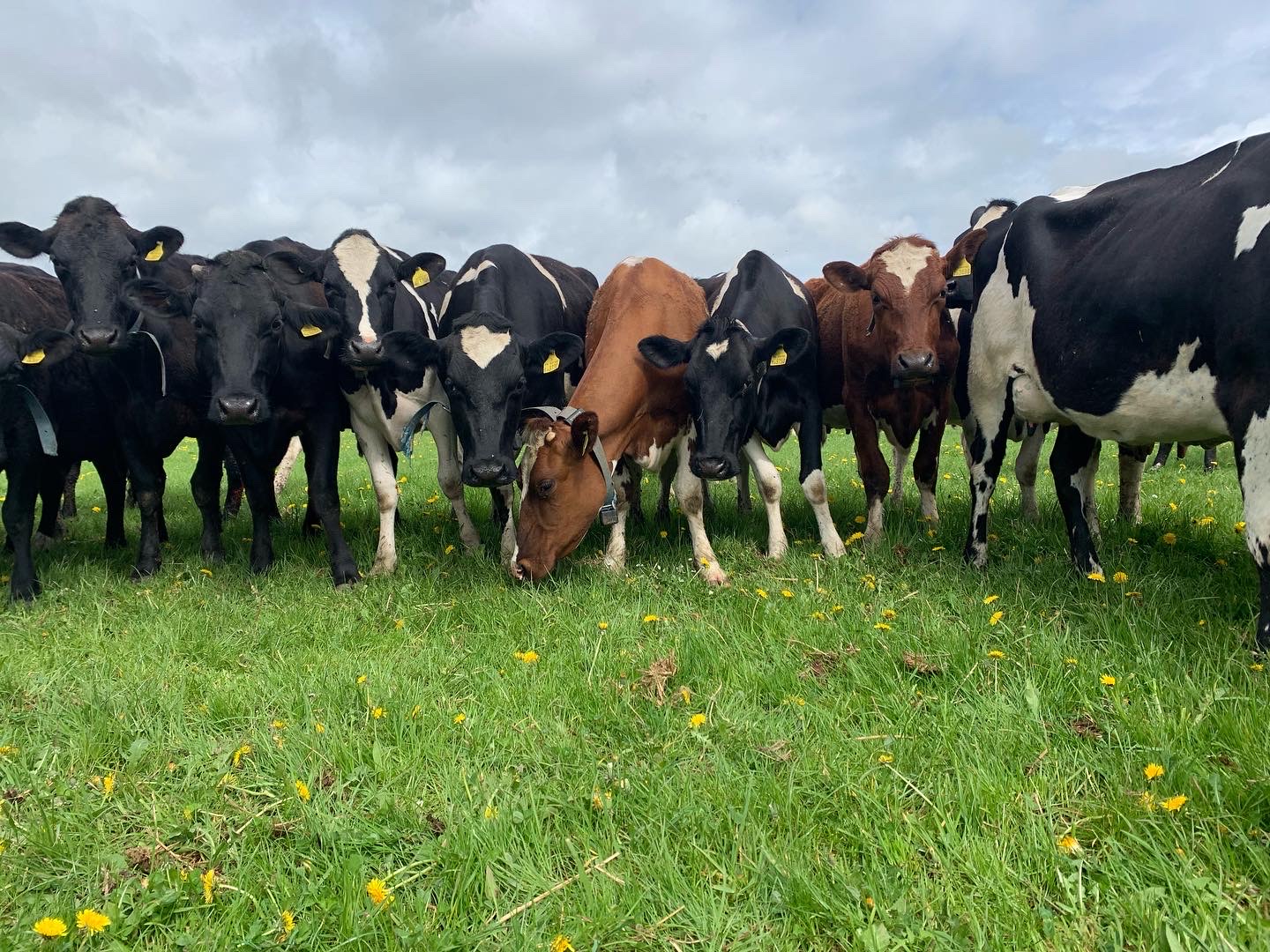 On the 4th May 2022 as part of the EU NEFERTITI project which facilitates farm demonstrations across Europe, the team at IfA took a group of 47 farmers and advisors to a farm in Shropshire to explore how organic farming approaches can improve the health of soil, ecosystems, animals, and farmers. The Farm is owned and operated by Tim and Louise Downes and their family. The team are milking 310 cows which are yielding 6,000l a cow (4,500 of which comes from forage). The cows are block calved, grazing cows from February to November. Tim sells his milk through milk buyer OMSCO under an organic, antibiotic free contract. From here, his milk product normally goes into global markets such as cheese, cheddar, and infant formula powder.

Trees are a crucial aspect of the system at the farm, providing food for cattle, anthelmintic properties, shelter, and environmental benefits without impinging on how much grass they can grow.

With support from research institutions, Tim has found that Willow trees contain the same substance as aspirin, an anti-inflammatory, which he believes allows his cows to self-medicate. Tim has found the willow trees to be very palatable within his grazing system, so much so that he makes willow hay to feed ill cows in the winter. As well as the willows, Tim also plants walnut trees, which serve as a biological method of preventing flies and fly strikes, especially around the milking parlour. Other ongoing agroforestry trials include sycamore, horn bean, and small leaf lime trees, all planted with the goal of evaluating which tree cows prefer to graze.

Outdoor calf rearing is another preventative measure against the use of antibiotics. After calving, Tim's team administer defrosted colostrum to the newly born calf, which is then allowed to stay with its mother for 24 hours before being moved to single pens for another 3 days. From here the calf is moved out to pasture in groups of 10-12, where it continues to be fed whole milk for about 12 weeks from a trailed calf feeder before being weaned. 270 calves were being fed around the time we visited Tim’s farm, which equates to approximately 2000 litres of milk a day, so about 800 - 900 pounds worth of milk! Mob grazing is specifically adopted at early stages for the youngstock to avoid worming practices. 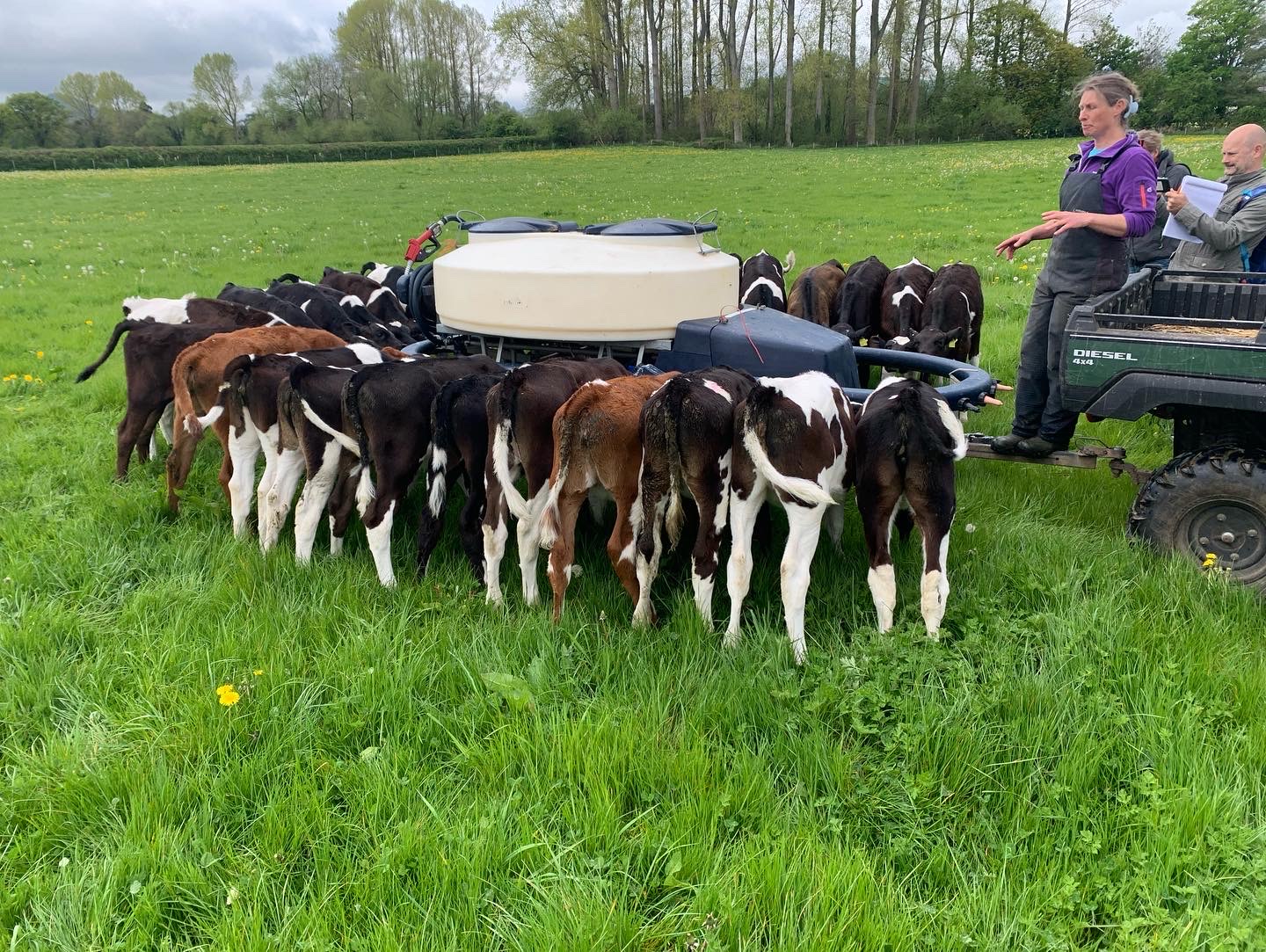 Tim states that when they get a persistently ill cow, they do responsibly use antibiotics as a last resort. Tim reported that in the previous production cycle, they used antibiotics to treat chronic mastitis, and lameness. However, the use of antibiotics comes into effect only after all homeopathic options and other non-chemical methods have not been effective. The decision to use antibiotics on any sick animal is also taken with consultation from the farm vet, who is aware of and supports Tim’s homeopathic system. However, one rule that applies is that cows treated with antibiotics are never allowed back in the main organic herd. Once treated with antibiotics, the cow’s economical value is derived by converting them to beef or after the antibiotic withdrawal period their milk can also be feed to beef calves.

Tim tells us that his farm does not use the genomic testing tool to improve the health and productivity of the herd. Utilising Irish Freisans, Flekvieh and Norwegian Red genetics, Tim instead aims to breed animals that have high resilience and are known to require less antibiotic use.  Fertility is also a key factor with all cows calving within a 12 week block period. As well as genetics, AFI milk collars are used to help assist with fertility monitoring.

Achieving grass yields of 13.05t/ DM/ ha and producing 4,500L of milk from forage on an organic unit is no mean feat, with diverse swards and rotational grazing key to The Farm’s forage success.

Ground is overseeded in April or August with herbal leys particularly clover plantain and chicory, which have very good anthelminthic effects. The chicory in particular is very deep rooted and acts as a natural wormer for the calves. With an above average rainfall of about 800 to 1000 millimetres, and a favourable geographical location, the conditions are ideal for the growth of the herbal leys.

Silage paddocks consist of herbal leys due to their durability, with Tim opting to move away from red clover leys in recent years.

Fields have not been ploughed for ten years to prevent carbon from being released. Overseeding is now Tim’s preferred method of grass establishment.

Tim believes rotational grazing is a vital part of looking after the soils. “It keeps the grass cover and means we tend to have enough supply even when grass growth slows.”

Being an organic farm, artificial fertilisers are out of the question. However, Tim uses biological fertilisers derived from vermiculites and containing minerals such as selenium, sulphur, and cobalt. They are applied in the spring when soil temperatures are over 10c. This helps improve grass growth by making the nitrogen in the system more available to the plant. These are applied using a sprayer.

The cattle normally start grazing  in February as the cows start to calve. The wetter fields are always first to be grazed  because there is then the option of returning to drier fields if the wet fields get flooded. Tim tells us that their farm primarily employs two methods of weed control. The first is the ‘mechanical’ hand control method! The second is through mob grazing management supported by topping. Cocksfoot is a useful tool in their clay based soil as it maintains moisture so stops the soil baking during the summer months.

Through careful manure management Tim has been able to increase dry matter by approximately 21 percent to 13.69 tonnes grass/ha compared with the previous year which was about 11 and a half tonnes.

The cows are loose housed to maximise the amount of slurry within the muck and a plastic sheet is used to cover the slurry lagoon making it a better quality for spreading, as well as reducing emissions to the environment.

Tim is currently trialling the use of ‘bokashi’ on the farm to improve the efficiency of his FYM. Bokashi is a Japanese term loosely translated in English as fermented organic matter. By adding Bokashi Microbes to his muck, (via a pump which drips the bokashi brew into the straw bedder) the PH stays low which in turn creates 60% more energy and holds on to 60% more carbon within the dung pile.

Once the yards are mucked out, the bedding is sheeted in a field and left for a couple of months. The resulting product is valuable compost, which can be applied to the soil and is absorbed a lot faster.

There have also been additional benefits since using Bokashi bugs, with Tim noticing a difference in the cleanliness of the yards and cow health. “The bugs seem to keep the bedding drier as they use the moisture from within the environment. They also outcompete the nasty bugs in the environment such as those causing mastitis, coccidiosis, Ecoli and mycoplasma. I’ve got friends using it in lambing and calving sheds who have also noticed improvements in the environment and stock health.

“Cost-wise, it is low cost, but providing multiple benefits. We also have to clean the yards out less regularly as they are cleaner, which saves diesel,” he adds. The Bokashi bugs are also added to the slurry to help break down the fibre and make it more usable. 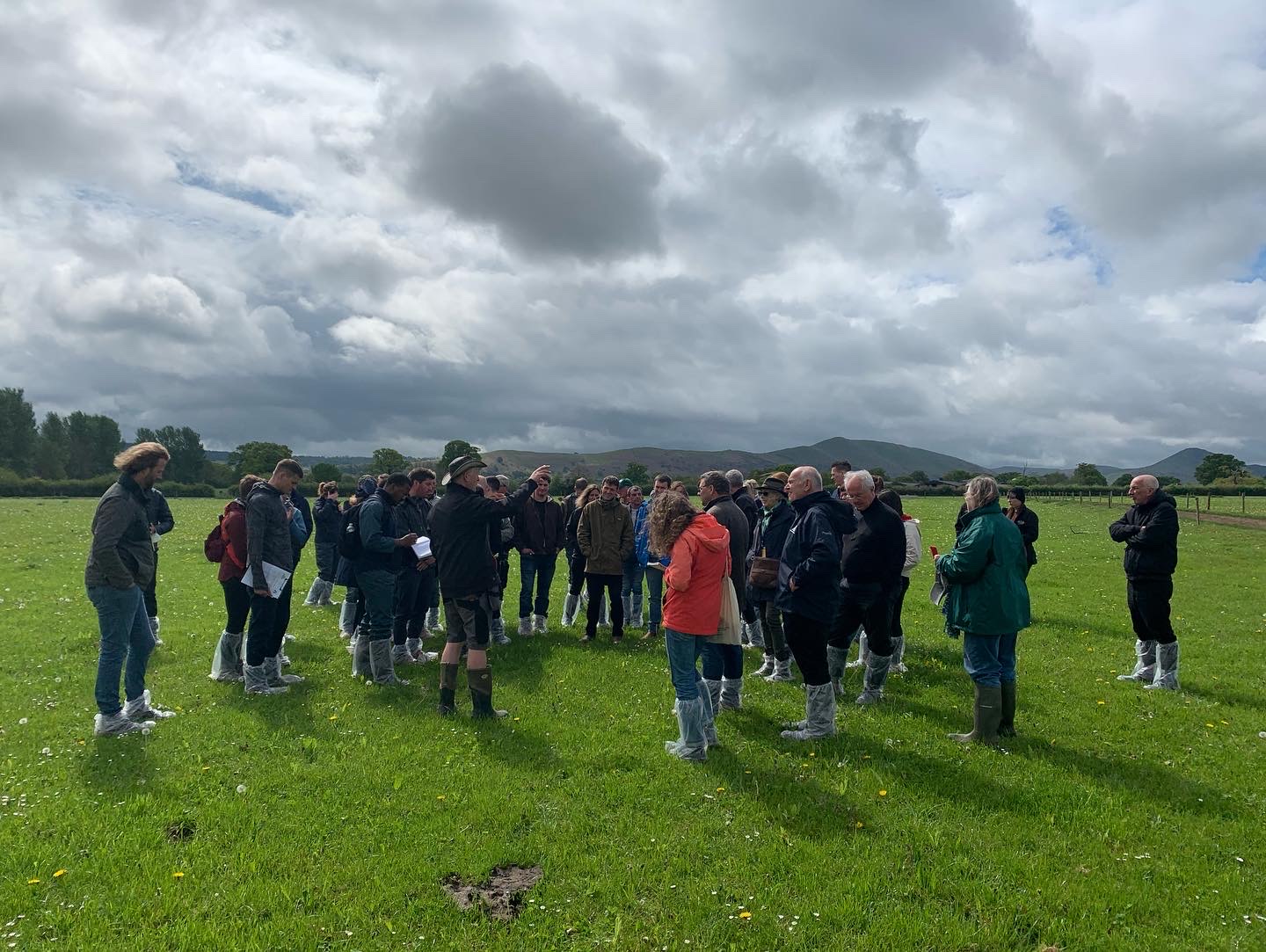 Whilst Johnes and TB are a challenge to herd health, there is no doubt that Tim is running a healthy herd and resulting profitable system based on the support from natural inputs. If you would be interested in seeing Tim’s system first hand then we would encourage you to visit ‘Down to Earth’ – a one day Regenerative Agriculture grazing show being held at Tims farm. Tickets for this are available here.