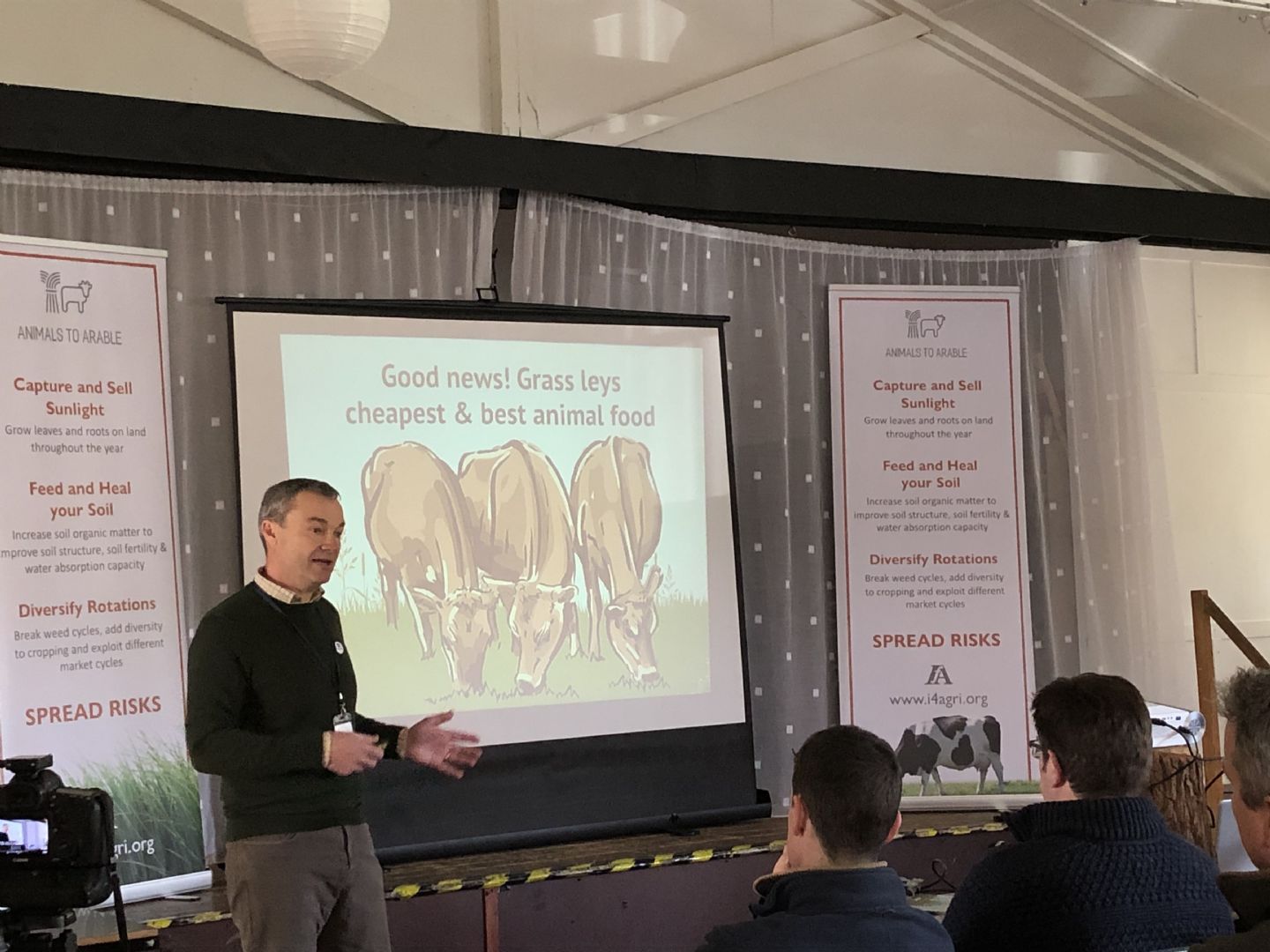 Despite a break in the weather making top dressing and spraying a possibility for some, over 100 farmers and industry members made the trip to Elveden Village hall (near Thetford) on the 4th March to hear from a range of speakers about the possibilities and benefits of mixed farming.

Hosted by Innovation for Agriculture (IfA), an agricultural charity set up in 2013 to bridge the knowledge gap between research and on-farm practice, the event acted as a ‘one stop shop’ for those looking to solve problems such as blackgrass, poor soil structure, and tight rotations.

In terms of farming sector, the majority of attendees were from mixed farms but were still running livestock and arable as separate enterprises and therefore were looking for advice on how to integrate the two into one system. Other attendees included arable farmers who were considering making the switch, and livestock farmers looking for farming partnership opportunities.

Kicking off the conference with a bacon roll, the first speaker was Stephen Briggs who is an organic farmer from Peterborough and also head of the soils department at IfA. Stephen started with a sobering statement that the quantified economic costs of soil degradation in  England and Wales is estimated to be £1.44bn. With this in mind, Stephen then asked the attendees who would still be farming profitably without the support of farm subsidies; only 8 farmers raised their hands. Next Stephen asked who suffered from blackgrass on their farm. Over 60% of attendees said that they did. From this Stephen stressed that these farmers “do not have a blackgrass problem, they have a soil problem”. Stephen stated that soil is the most undervalued resource and reminded farmers that “soil is refillable; it’s not too late”. His key message to improve the quality of soil was that enterprise change is necessary, and that livestock and grazing leys should be part of this mix for arable rotations. By building this resilience into soils, Stephen believes that farmers will be better prepared to protect themselves against weather extremities which are becoming common place.

Andrew Spinks, Brown & Co – How the numbers stack up

A vital aspect to consider – will it be profitable to farm with animals in the rotation? Andrew began by highlighting areas of change that are necessary within livestock only systems. The recent RBR farm business survey showed that all of the positive farm income on the majority of the UK beef and sheep enterprises was from Agri-environment schemes, BPS, and diversification. Andrew believed that to overcome this, livestock producers needed to adapt and modernise, and a way to do this could be through farming partnerships and grazing agreements. Andrew also highlighted that in 2018 only 57% carcasses met specifications. So, it is clear that farmers must become more efficient and accurate when producing meat. Lower input systems, such as those seen in New Zealand should become more common place, and livestock and arable farmers can create a mutually beneficial arrangement by implementing this.

As always, Ian delivered a passionate and informative presentation. He started with valuable advice; “Farmers should have a low cost of production, be a seller not a buyer”. Ian pointed out that we need to consider the bigger picture when thinking about the benefits of grass leys. As nitrogen prices continue to rocket, Ian highlighted that 30-50% legume content in a grass ley can fix 200kg nitrogen per year. Anthelmintic mixes, such as chicory trefoil, can reduce worm burdens. Ian proved this, by using a neighbouring farmer as an example, who hasn’t wormed his lambs for two years by using one of these herbal leys.  Ian stressed that using a vast range of plants in these mixes is vital, and if this is implemented, there is no reason why animals shouldn’t be kept outdoors all year round, whilst still maintaining welfare and achieving high protein levels. Ian’s five top tips for a successful cover crop, were “fine, firm, shallow, sow, roll”. Ian commented that in his experience cattle are best for building soil fertility.

At an event such as the A2A conference, it is always good to provide farmers with information from their fellow peers. Tim is an outstanding example of the transition from a traditional arable farm to a fully integrated mixed farm. Using ‘enterprise stacking’ as the key to his farm profitability, Tim realised change was needed, having used no-till systems since 1997, yet still only achieving wheat yields of 7.5t/ha. Tim stressed that he believed ‘no-till’ was only a steppingstone. He began by integrating sheep into his rotation, and from here added store cattle (he now has over 500 on summer grazing) as well as portable chicken houses, pigs and a portable dairy. Tim has now incorporated over 500 hectares of herbal leys into his rotations. He believes that cattle are easier to incorporate than sheep due to their trainability in terms of fencing and movement, but acknowledges that TB restrictions may make sheep the better option in some areas.

Alex’s key message was to collaborate to accumulate. He believes “that as an industry we are notorious for not sharing our problems or our successes.” Reminding attendees that medium sized farms would lose £6600 annually from 2021-2028, he believes that now is a real opportunity for farmers to work together to become more efficient. He advises that farmers should think of their marketplace and work backwards to consider how they could club together to demand prices, processing hubs, share knowledge and work together to secure more funding. 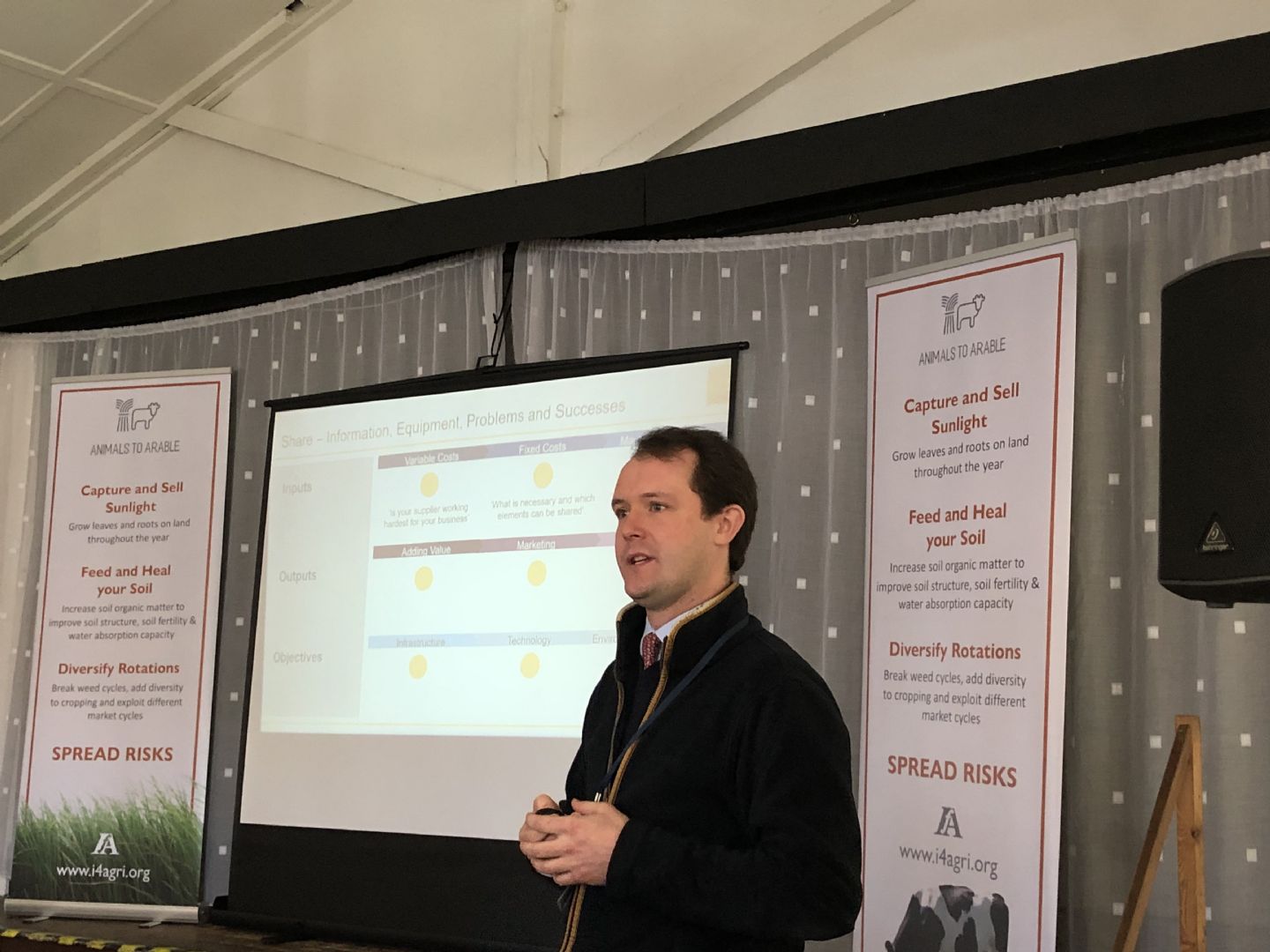 The take up of bed and breakfast pig units has rapidly increased over the last 5 years. Mark pointed out that in terms of straw requirements, arable and pig enterprises are the perfect partnership. By farming pigs on a contract agreement, farmers can ensure that incomes are more stable and there is less risk. BQP offer 13 batches on a 6yr contract, which includes vet care, carcase disposal, assurance, and feed.

Providing another farm case study, Rob farms a mixed arable and sheep enterprise in Hertfordshire. His flock of Romney Marsh sheep, which Rob promotes as ideal for an extensive system, graze each field twice in a 4-year rotation on a spring/winter system. Rob advices that in this kind of system it is best to produce low cost, supermarket sheep, not pedigree winners. He is averaging £92/lamb at 21kg carcass weights. He is getting a daily live weight gain of 365g/day from grazing oat and clover mixes. Rob agrees with the other speakers that from his experience, a rotational grazing system is key to success and stresses that to avoid poaching the sheep need to be moved regularly.

For those who do not already have livestock on the farm, many wouldn’t know where to send their finished product. Tim works for AQM, a farmer co-operative selecting the most suitable abattoirs for the breed and confirmation of the finished animal. Tim agreed with Andrew Spinks that targeting the optimum grade is crucial when aiming for optimum efficiency. He recommends farm assurance for increased marketing opportunities and reminded farmers that cereal farm assurance is separate to beef and lamb. Tim advised farmers considering cattle in the rotation to be aware of the areas they are buying them from and to consider the high-risk TB areas.

Describing himself as “an arable farmer, with all my livestock underground” Richard believes the key to conservation agriculture and sustainable intensification is a focus on soil and better utilising sunlight. He advised stripping out costs whilst maintaining productivity of cover crops by using them to ‘farm’ sunlight. He stated that this way a cover crop becomes a cash crop. Also promoting 1-day paddock grazing on cover crops, Richards key advice to farmers is to “Replace steel with roots, fertiliser with photosynthesis and Nitrogen with Nodules”. 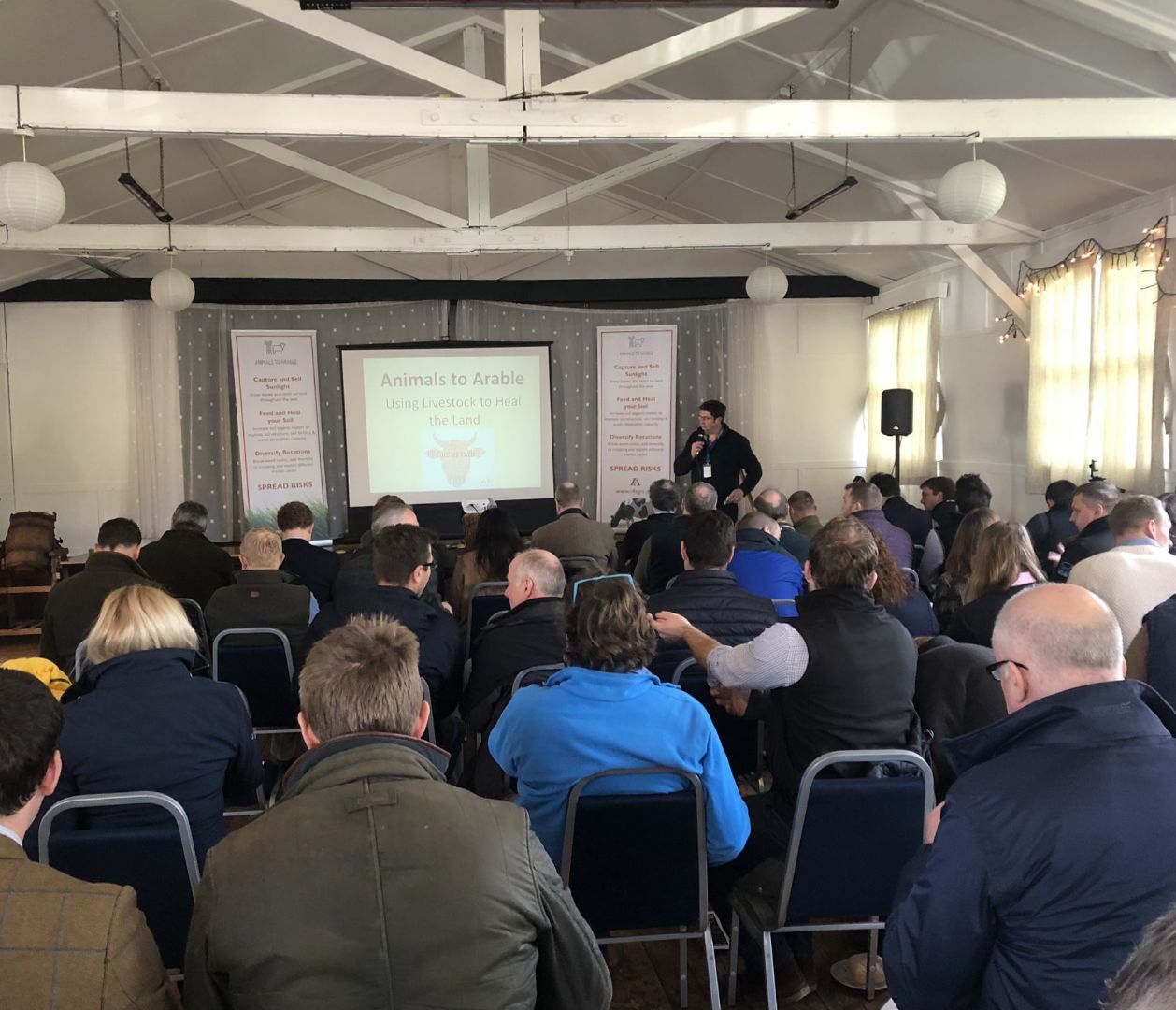 In summary, the key take home messages from the Innovation for Agriculture Animals to Arable Conference were clear:

Innovation for Agriculture would like to thank all of the speakers who gave up their time to share their valuable knowledge. Their presentations and recordings from the day can be found in the resources section of our website.