2022 Soil Farmer of the Year Winners 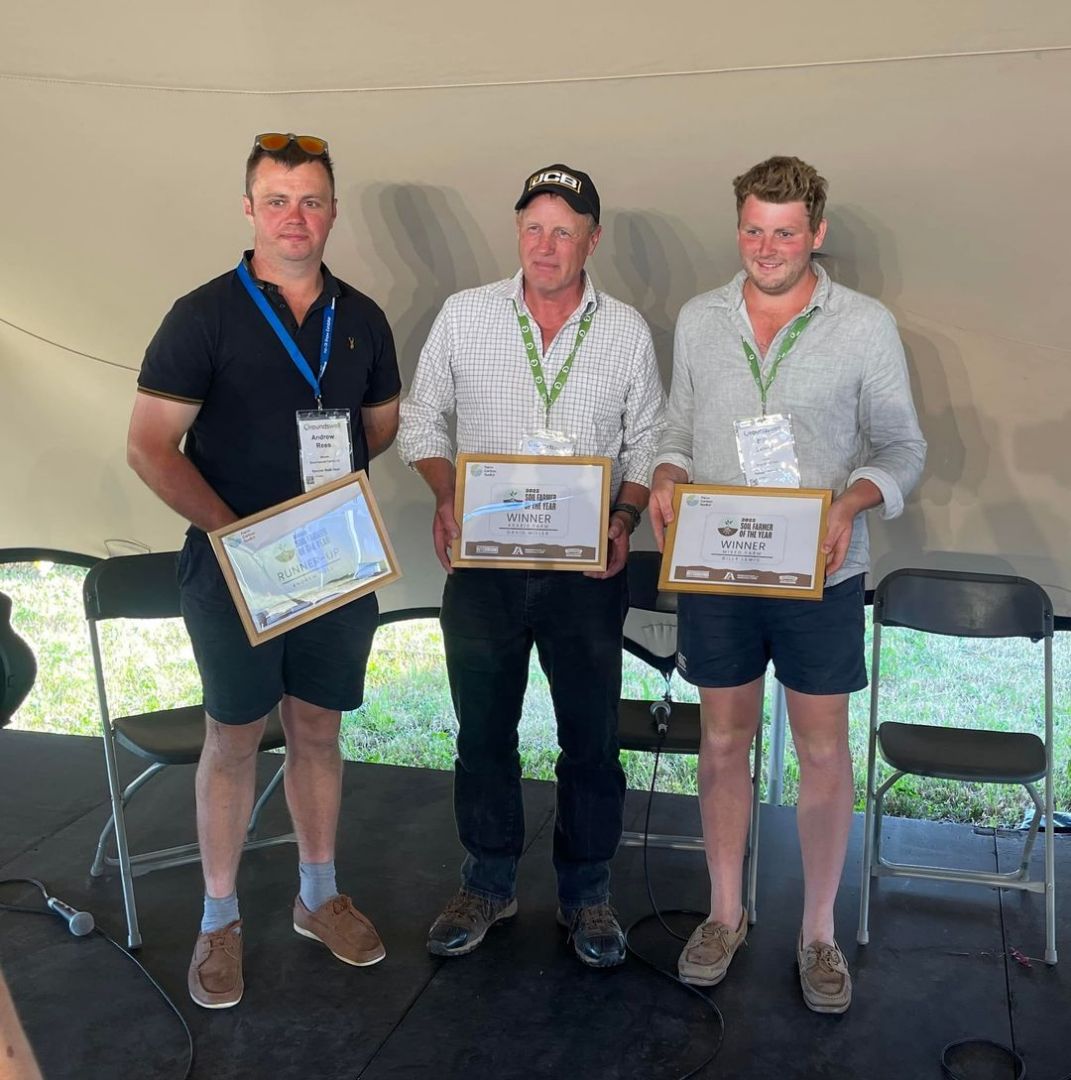 The competition, now in its seventh year, is organised by the Farm Carbon Toolkit in conjunction with Innovation for Agriculture (IfA), and generously sponsored by Cotswold Seeds and Hutchinsons.

The top three farmers will receive prizes of fertility building or green manure seed from one of our generous sponsors of the competition, Cotswold Seeds.

The competition aims to find farmers and growers who are engaged with, and passionate about managing their soils to create a highly sustainable, resilient and productive agricultural system.

Billy farms 145 hectares in Herefordshire, producing a variety of arable crops alongside sheep and pedigree Hereford Cattle enterprises. Billy’s focus on the farm has been to regenerate tired soils which have previously been in a high-intensity arable system and implementing a rotational grazing system to create high quality forage for the livestock. Billy says: “We have introduced herbal leys which are managed with mob grazing with additional cutting if needed. We started with a select group of animals and now graze everything in a mob system.” The arable rotation on the farm is fully integrated with herbal leys and diverse swards to ensure livestock are able to graze and improve soil health. In addition to the livestock, Billy also uses composted FYM to benefit soil health and plant nutrition, “spreading compost as soon as the bales are cleared from the field means we can generate really productive catch crops before the following cereal, benefiting our soil health and nutrient capture.” This has led to vast reductions in nitrogen usage, “our main goal is to drive down fossil fuel use and inputs, we have halved the amount of nitrogen we use in 3 years and would look to half this quantity again over the next 3”.

Our Arable Soil Farmer of the Year David Miller, manages 700 hectares of chalk/limestone in Hampshire. David has designed a simplistic system whereby he has drastically reduced fuel consumption, crop protection inputs and fertiliser across a diverse arable system. Through the use of strategic cover and companion cropping within the rotation, David has reduced his need for bagged fertilisers, reducing nitrogen use by 25% and not applying phosphate or potassium for 7 years, instead using roots to harvest what is needed for the following crop, he explains: “With all these benefits we are putting much less money at risk in each crop and therefore we are able to budget for lower yields. Yield is no longer our driver but margin is”. David said “we have seen vast improvements in our soil health, you now rarely walk across the field without standing on a worm midden per step, through testing we also know our mycorrhizal levels are increasing and our fungi to bacteria ratio is improving”. Focusing on the soil through a ‘no-till’ approach, David has had his tramlines in the same place for 7 years - minimising compaction and maximising natural soil processes, he says “soils appear to repair faster and better after events like a wet harvest”. This system has resulted in vast emissions savings alongside benefits to the bottom line by minimising fixed and variable costs, he says “before we transitioned away from a traditional conventional system yields were static and costs were rising. The goal was to prove a system that would work for broadacre crop production which was simple and easy to look after”.

Our Runner-Up is Andrew Rees, a dairy farmer from Haverfordwest. Through implementing rotational grazing systems alongside diversifying leys with herb rich species and legumes, Andrew has reduced fertiliser rates, improved herd health and productivity, explaining “you can feel the life in the ley, compared to the monoculture of ryegrass. Where we've done good work, we’ve got good worms”. Managing a heavy soil type has been challenging, focusing on keeping soils covered with living roots and utilising the benefits of the trampling of residues back into the soil profile has seen great improvements in the structure, “we have a range of soil types on the farm which does help with grazing options under a rotational system - we now produce more milk whilst maintaining the quantity of forage grown with far less fertiliser”. Andrew says, “herbal leys cannot be managed like a ryegrass, it needs longer rests and more residual. Where we have existing herbal or clover leys we sow grasses directly in the autumn”. Additional benefits of reducing fertiliser requirements by 60% over the previous three years by using technology such as a Tow and Fert application system to apply inputs and conduct activities such as over-seeding and liming. Andrew explains, “following the five main principles of regenerative farming has guided the transition on the farm, focusing on keeping ground covered with living roots of diverse species minimises the soil disturbance required and maximises the possibilities for grazing and cutting” adding, “you do however need to apply a sixth principle of context - the limitations or strengths of your own farm and the system you want to create”.

This year’s competition saw our highest number of entries yet, again demonstrating the excellence and knowledge of farmers in UK agriculture. All of the judges, sponsors and organisers would like to thank all of the farmers for their time to apply for the competition and the quality of the entries that were received. The top three farmers will also all be hosting farm walks that are open to anyone who is interested, where there will be a chance to see, understand and dig a bit deeper into what they are doing. Further details on these walks will be available on our website in the coming weeks.